“From the Sky” – by Stephen McMurtrey & Kent Clark

“It Happened… in Will Rogers Gardens” – artist Jonathan Koelsch

A word from the editor…

One of the concerns when the Okie Comics magazine began was, “What do we do when we run out of stories to tell about Oklahoma?” Such a thing seemed a long ways down the road since we have had a jam-packed history of Native American residents, European explorers, land runs, oil booms, a Dust Bowl, and plenty more to talk about. We even have a space port out near Burns Flat!

Of course, there surely must be some limit to the stories we can tell, but even I was surprised at how far out that limit must be. In a conversation with artists a few months ago, I suggested that there must be things that couldn’t work, like having a story with orcs in it. Within two minutes, we had three suggestions of how that could come to be in a fairy tale Oklahoma, or characters wearing masks, or even mutants in a post-apocalyptic Oklahoma. The War Hogs of “OKC 2185” in this issue may not quite be orcs, but I was impressed when Mikel pitched the idea echoing that there could, in fact, be even more stories to tell.

There truly is no limit to the creativity in our state! 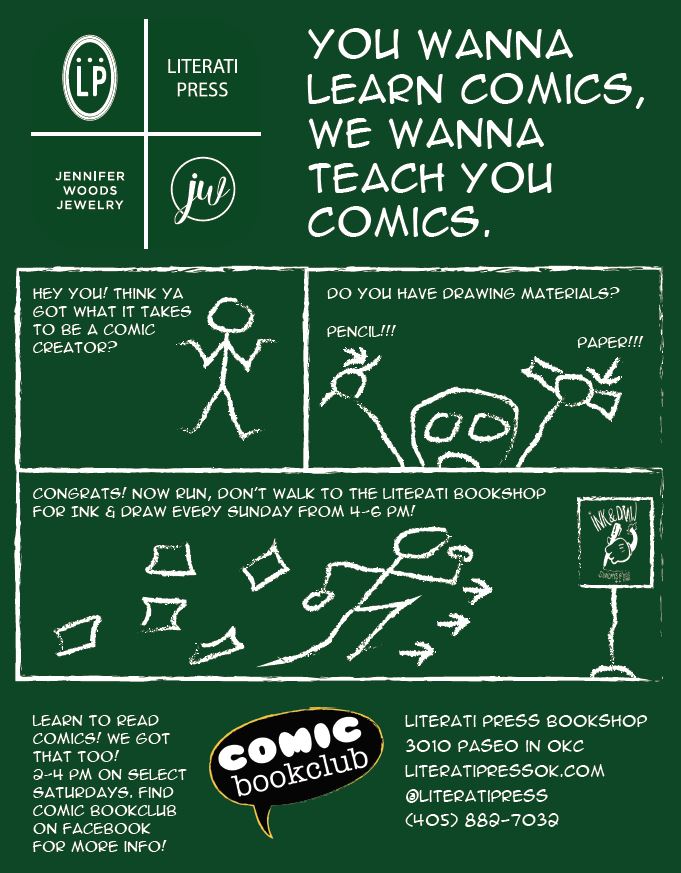 When did you start drawing?
I started drawing as soon as I could hold a pencil. My father tells the story that when I was four years old he and I were watching a TV documentary on the artist Michelangelo. He said that when it was over I turned to him and said, “That’s what I want to do!” The rest is history.

Who are some of your artistic inspirations?
In comics it would be Brian Bolland, Tony Millionaire, Dick Sprang, and the King of Comics, Jack Kirby. When it comes to fine art Van Gogh for his use of color, Picasso for his many different styles, Leonardo for the fact that he did so many things besides paint.

Any projects you’re working on?
My current project is creating a new mythology, complete with all of the different gods, writing and illustrating their biographies and background stories. I’m also working on releasing two new albums from my band Squeaky Burger One. I also have two comics that I’m working on and putting the finishing touches on a script for a children’s musical that involves every kind of puppet you can imagine.

What’s a good way for fans to check out your work?

The best way for people to check out my work is through my Facebook pages or visit my art gallery, Stark Art, in downtown Pauls Valley, OK. My work is also in Paseo Artworks gallery in the Paseo district in OKC and at Whispering Willows gallery in Norman, OK.